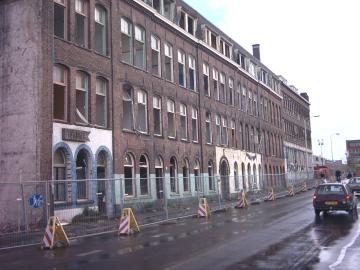 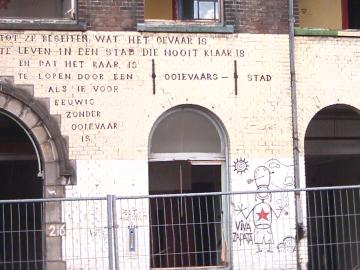 We at www.rhizomes.nl received the following story anonymously:

After receiving a phone call on I had gone to the BA on Friday morning. Unfortunately I arrived too late to help out inside. By the time I got there the place was crawling with (riot)pigs, firemen, vehicles, spectators and the press and you couldn’t get within 45 meters of the building There were roadblocks everywhere and the traffic was a mess.

So I decided I would document what followed with my digital camera. I walked around with a mate for hours and observed the Riot police growing in numbers. There were regular people as well as squatters in the crowd that wanted to do more than just watch but there were too few.

One punk shouted “Fascist pigs” at the police and was immediately arrested.

Some of the Ado supporters that were watching the eviction were heard to say things like “that’s how they waste our tax-dollars.” and “Fucking Jews” !!?!

Soon their attitude changed however. While we (about 3 squatters and 80 very normal people) were looking two riot police vans drove up fast and actually hit some people as they drove by. Then riot pigs ran up, formed a line, shouted something over the p.a. and charged immediately. They wildly ran and hit anyone they could with nightsticks!! Fascists!! There were many children, girls, women and older people in this very narrow street. Of course people shouted in fear and later in anger. I heard “You motherfuckers!!” and “What the hell is wrong with you people!”. I also saw people filming this abuse. The only very slight provocation was that the plastic “police line” was broken and that about two people walked up a little closer to the BA. There was no danger in this since there was a waterway and about 40 meters between the BA and us. People just sat down and watched, that is all. The cops let them for about half an hour and then suddenly lost it and battered people!

I heard a lot of squatters did come and help out. Or at least many tried. Allegedly there was a “temporary emergency situation” everyone that looked slightly funny or could not show papers was detained or put on a train back home.

Later, with permission of some residents some others and we climbed on the roof of the apartment building directly across the main entrance of the BA. This meant we were just outside the police lines. We had a beautiful view and just sat down to watch the show. Pretty soon however a lot of policemen –many in plain clothes- entered the apartment building. They did not dare climb on the roof itself so they started shouting and threatening we should come off immediately or face arrest bla bla dibla. Some of us did so; some of us did not or chose not to hear them. Remember the whole area was extremely noisy. After some time they borrowed a ladder FROM THE FIREMEN –Fuckers!

Anyway, they came up on the roof and made the rest come down and we all had to give them our names. Everyone did this except me. I was the only one arrested and charged with “refusing to obey a police order”, ART 184 LID 1 SR. I got cuffed and stuck in a police van, from there I could just see the ME container hoisted up against the building. Off to the nearby Jan Hendrikstraat cop-shop we went. Searched me “what’s your name” bla, bla, “why didn’t you” bla bla. I only told them that they should be ashamed to do their work if it includes making people homeless and arresting people on ridiculous charges. Then they directed me to a day-cell. On the way there I saw lots of boots and shoes, meaning loads of cells were already full. In they put me. Over the next 21 hours of detainment I had some interesting cellmates, one looked like a sharp skinhead. He had been going to the BA for years. He was poked in the face twice with a nightstick and then arrested because he pushed a riot police out of the way because the cop was about to batter a small friend of his. After 6 hours and signing a statement (and receiving an order to appear in court….) he was let go.

The second was a punk guy that had been inside the BA during the eviction but decided he had enough before anything “serious” happened. As soon as he climbed out he was arrested. The charges? “Just being there.”  Despite his retarded charges he was released about 9 hours later and only after signing a statement.

The third was a young normal looking guy who said he had done nothing –when he asserted this in everyone’s presence, the police never contradicted him-. He was let go after about 3 hours. I think he also signed a statement.

Number four was a typical young “Hagenees” who had thrown an empty beer can and was charged with assault I think. He also told us the “Kankah-ratte” (I swear he said Kankah every other word) tried to pin possession of coke on him even though he did not have anything on him!! They dropped the last charge; he gave his name, signed, got a court order (I think) and walked after about 4 hours of detention.

The last two were punk people who had been sitting in a tree house directly behind the BA for about 4 days!!! They did not manage to get these people out until Friday morning 08:00! The insane, irresponsible police had sprayed them with their “water-werper”! The two could have easily fallen to their deaths 40 meters below! In the end they used a crane to get them pull  them out, in the process they severely scratched up the girls leg. They were both charged with “damaging goods in public”, ART 141 and ART 184 “refusing to obey a police order” as well as with throwing a Molotov cocktail!!! Yeah right! As if they would have and throw Molotov cocktails way up in an extremely flammable tree house while they are surrounded by a woody (flammable) forest type area. Despite being an obvious fabrication these two people (and the others in the Tree-houses) face up to three days in prison. Only two hours after their arrival they were told they were being put “in verzekering”

As for me, my charge is so minor they are not even allowed –by law- to keep me for more than 12 hours. As soon as that time was past I give them shit, told them they had to let me go and they did so immediately, they were already planning to anyway.

After I came out I called some people so they knew I would be ok. Had a nice meal (we were barely and in some cases, not fed at all) and then went straight to the BA. There I took pictures of the demolition crew at work (dirty fucking rats) and the severely demolished BA. There was a riot cop onsite as well as some regular security. I told the security that he “Should be extremely ashamed of what he was a part off”. This no-neck intellectual dwarf only said, “mwoh, I don’t care about that.”

So I asked him while I pointed at my digital camera “In that case how about I put you up on the internet?” He did not say much.

So here he and his colleague are: 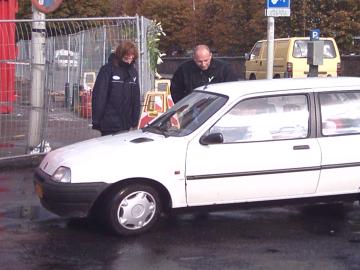 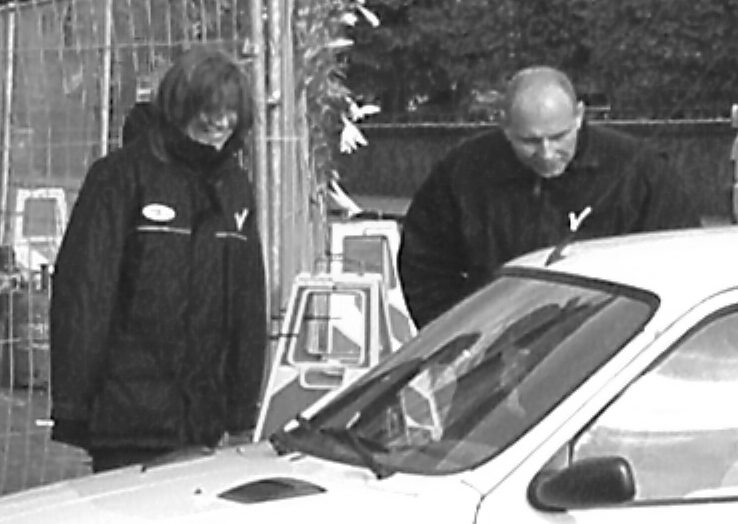 After taking the pictures,  I caught a train and at home wrote this and send it to the rhizomes.nl crew.

As I was writing this piece I just heard the news that some people (who had the same charges as the two in the trees) were just released (18:45). That's great! It possibly means that there is a good chance that most people with those charges have gone free or will go free very soon.” 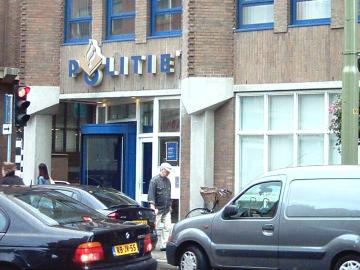 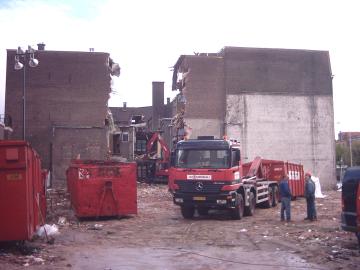 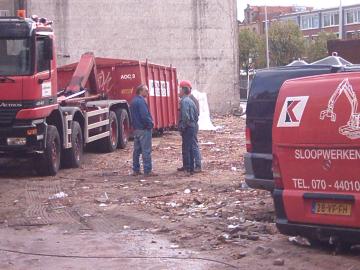 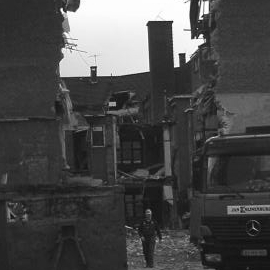 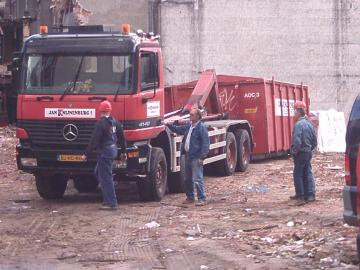 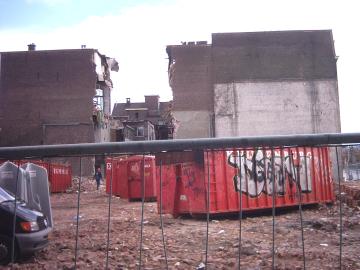 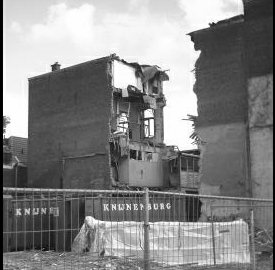 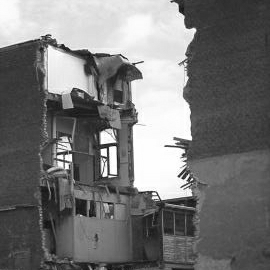 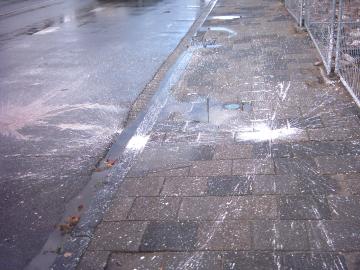 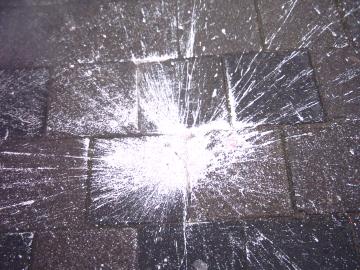 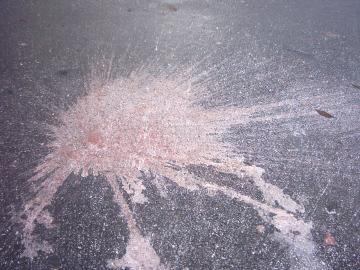 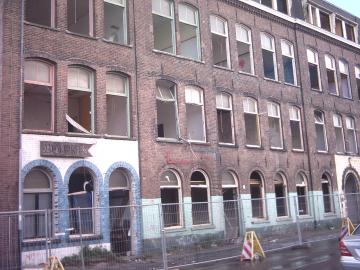 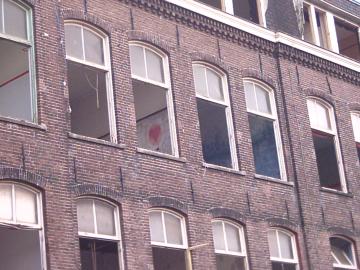 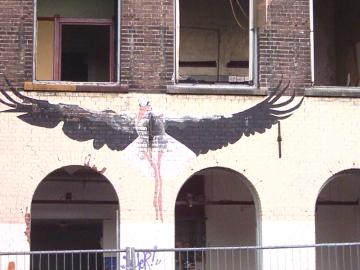 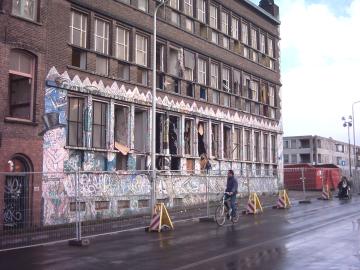 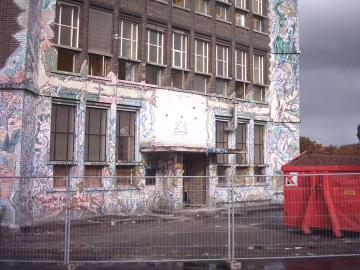 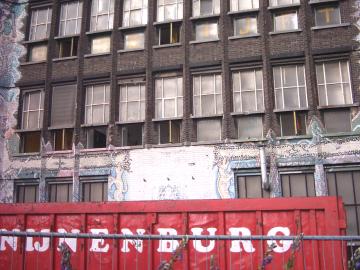 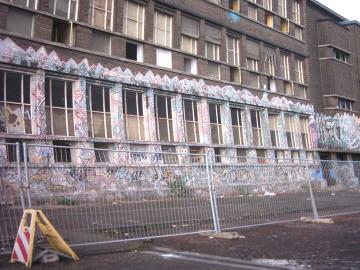 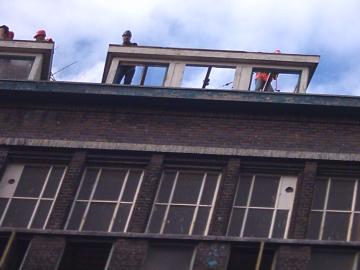